Fashion week moves to its fourth and final destination: Paris. You hear this iconic fashion event and what better city to say the final goodbye to a hectic fashion season with back to back shows in NY, London, Milan and now Paris. When we think of Paris let’s be real, we are really thinking haute couture, style and some of the most refined fashion houses in the world; like Chanel and Yves Saint Laurent among others.

Come the end of fashion month, we always think we’ve seen it all. From hacked-off clip-on bangs to topless models, there are few things that can still shock us. But we must admit that Paris Fashion Week has left us with our jaws in our laps.

Between the outrageous high-fashion sweat suits at Stella McCartney to the bizarre face cages at Alexander McQueen, we learned that haute couture really is in the eye of the beholder.

Here are some of our highlights of this year’s Paris Fashion Show.

For Miu Miu, Miuccia Prada introduced the proletarian to the artist. Here, sportswear separates in denim walked alongside fur capes (fur capes for spring!) with painterly splotches and tie-dyes.

There was a tad of the Mad Men vibe in the straight skirt and belled tunic silhouettes. But it was done in colored fur and slick, coated fabrics.

Then contrasted colors came —pink against ink, white against black. The models were polished with jeweled bracelets and necklaces. Jewels detailed the pointed shoes, too, while bags stuck to ladylike, boxy shapes.

Two if by…escalator? True to form, Marc Jacobs saved one helluva dramatic statement for the final day of the spring collections. He was inspired by Daniel Buren’s permanent Les Deux Plateaux exhibition at the Grand Palais—450 striped concrete and marble columns in varying heights. Buren created the runway installation, four escalators with horizontal and vertical stripes, from which pairs of models descended.

How’s this for buzz? Sarah Burton’s spring runway was all about the McQueen bee—and we mean bee, not b-. In past seasons, Burton has been subtly introducing the bee; specifically, using it as an accent to the house’s signature skull on rings and pendants. But for the runway, she let loose with all things bee. For starters, the runway itself was a white honeycomb that she then echoed in the pattern and lace of her opening look.

What did Valentino have to say?

They swept through the decades—30s, 40s, 50s, 60s, 70s and even a little Downtown in the gathered chiffon necklines and gauzy layers of the longer gowns. (Lady Mary, exit 61 was for you.) But it didn’t feel referential or dated, just pretty. Really, really pretty.

Fashion and Celebrities – Hand in Hand!

Fashion and celebrities go hand in hand so you wonder who are some of the celebrities visiting Paris? We’ve seen so far Kanye West arrived at Dior, Drew Hemingway front row at Balmain, Robert De Niro making a surprise appearance at Dior, French actress Melanie Laurent supporting Raf Simos at his debut for Dior. 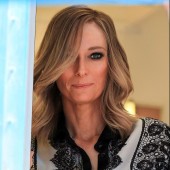 Louis Mariette – The Opulent Milliner, Behind The Scenes