It makes me really happy to see Africans especially women, breaking stereotypes and succeeding in business. This is one of the reasons I decided to start a blog. But I was so busy last week with a translation project that I didn’t get a chance to think what to write about next. I like doing the interviews like the one I did on Hidden Voices and I do have another one lined with a Ugandan lady who’s doing some extraordinary work in East Africa. But for today I’m kinda happy because Handbag Designer101 said they’d like to feature me and sent me some questions to answer in preparation. Going through the questions really took me down memory lane. I laughed a little (actually a lot), as I reminisced the days when I was still flapping around in “idea land” trying to think what on earth I could do apart from work. I remembered how one time after I had decided to try bag-making, I was so frustrated that I couldn’t find any sewing contractors willing to work with someone just starting out.

How To Face Rejection

Everyone I contacted said they weren’t interested in producing small quantities. At the height of frustration that day, I hopped on the internet and ended up in Europe! I couldn’t afford to make large quantities and didn’t want to either. I think I more or less expected the bags to NOT be exactly what I wanted and was prepared to live with that. Actually, what I was really worried about was the quality. I’m almost fanatical about finishing. In the end I decided not to use one of my better designs and instead sent a sample bag that I had used to have my first bag pattern made – which had proved to be a disaster.

Wasn’t I scared about them not making the bags right or even worse, being cheated? Of course I was but I had done everything I knew to do (which at the time was almost zero) to find someone, anyone, to produce them. I didn’t even know I had to provide technical sketches of the bags. I could barely draw a circle. You see, all this happened just after I had taken the radical decision that rather than just SELL bags, I would start to DESIGN bags. (Read the full story here). Well, I later learned that designing the bags was just the beginning of the process. I still had to select the fabrics and leathers, lining, zippers, handles and other bag components AND send these to the sewing contractors – and all this to Bulgaria. Yes, you heard me, BULGARIA!.

How To Negotiate Minimum Orders

I had to plead for mercy to get them to agree to make the bags since initially they too told me that their minimum order was 1,000 pieces. I wanted only about 30! Eventually they said yes, but by that time I had developed cold feet and all the concerns I mentioned earlier came flooding back. I found myself rehearsing all the what ifs and this, to the point that I decided maybe I should just forget the whole thing. I mean after all, I had absolutely no contacts in Bulgaria and knew nothing about the country and to be very honest with myself (and you), I had absolutely no idea what I was doing going all the way to Eastern Europe to make bags! But I did have ONE thing that stood in my favor. You see, I had a dream that wouldn’t die. And when you have a dream…

How To Keep believing In Your Business

I was still teeter-tottering over what to do as common sense and conventional wisdom were both hinting me very strongly I might add, to drop the whole idea. I don’t remember what the trigger was, but out of nowhere, I suddenly remembered a book I had read many years ago. It was the autobiography of Dr An Wang, co-founder of Wang Laboratories and titled ”Lessons”. There were two quotes in particular that really left a footprint in my mind. The first one said: “You have to risk failure to succeed. The important thing is not to make one single mistake that will jeopardize the future.” Well, I’m not actually going to Bulgaria; just my fabrics and the bag components so I couldn’t be jeopardizing that much, could I? I mean it’s not like my life is at stake or anything like that, was how I reasoned. Nonetheless, I had to admit that it sounded pretty crazy to go all the way to Bulgaria just to get a few bags made when I had the whole of the U.S. (where I lived at the time) to choose from. I was still struggling with yes, do it and no, don’t do it, when I remembered that there was another one of Dr Wang’s quotes that I had stored somewhere in my emails. I searched for it and found it. It says: “Progress is not a straight line; the future is not a mere projection of trends in the present. Rather, it is revolutionary. It overturns the conventional wisdom of the present, which often conceals or ignores the clues to the future.”

How To Choose Your Manufacture

Well, I figured I had wrestled with conventional wisdom enough and that if it worked for Dr Wang maybe it could work for me. So I followed his advice and tried to steer away from anything I felt would jeopardize the success of the project. I followed up with the company with tons of questions, emails, phone conversations and did as much research as I could on the company via the internet. Many weeks later, I decided to go ahead.

Did everything work out perfectly? Of course not. Was I cheated? Nope. Were the bags well-made in terms of quality and finishing? Very. Did they keep to the agreed deadline? Yes. Did I get what I expected though I didn’t provide any technical sketches? They exceeded my expectations: the sample bag I sent was awful. What was the retail price of the bag? $80. Was it worth all the effort? Absolutely! Did I make any mistakes? Of course. I learned how important it is to provide good technical sketches if you want your designs to be captured properly. I was just lucky to have had some sort of sample to show to give an idea of what I wanted. I also knew nothing about US customs at the time and subsequently took a course on it to escape the bondage of my ignorance. Would you do it again? If necessary. Why? “Because sometimes you have to step out on what you see ’cause if you see the invisible, then bless God you can do the impossible.”

Having by-passed straight lines to walk in crooked lines and step in puddles, I have learned from Dr Wang never to underestimate the power of a quote. Besides, you know what they say: if the quote fits, run with it. 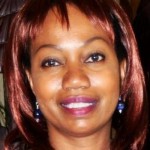 Edith Nkwocha I am Style Coache & Relooking Specialist/Airbrush Makeup Artist. You can book me at Style Seat.

Understated Luxury – Bring Back The Class